US ethylene boom is a dangerous game 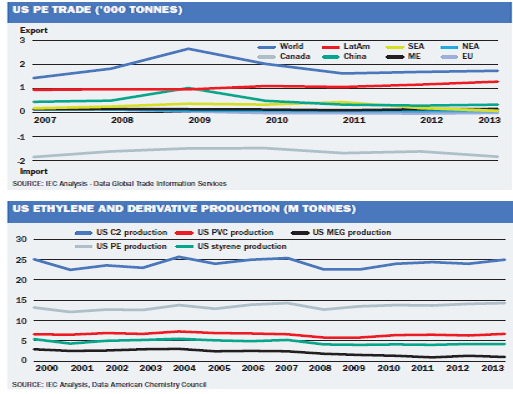 The blog continues to lose sleep at night worrying about the likely impact of the planned 10MT expansions of US ethylene and derivative capacity.  And it seems it is not the only one.  Since it first raised the alarm last August, it has talked to a number of senior industry executives and investors who also cannot see the logic for the new capacity.

The reason for the mounting concern is captured in the above two charts from the blog’s new analysis of the subject in ICIS Chemical Business this week:

Of course, the US has an advantage in energy costs today due to shale gas.  But historical evidence suggests it is most unlikely this will continue, as there is no fundamental reason why oil prices should remain at today’s uncompetitive level.  But let us leave this evidence aside and accept that the advantage will continue.

The key question is then highlighted on the exam paper, namely where will all this new production be sold?

The problem lies in the fact that cheap supply is no longer the key to commercial success.  It was critical in the BabyBoomer-led boom, when the global population trebled between 1950 and today.  Of course, there could never be enough supply to meet all this demand.

But today, fertility rates have halved around the world since 1950, whilst life expectancy has increased by 50% to average 70 years.  Between a third and a half of adult populations in most countries are now in the New Old 55+ generation.  Their numbers have quadrupled to 1.2bn since 1950, and will increase a further 50% to 1.8bn by 2030.

Common sense, as well as official data, tells us that the New Old already own most of what they need, whilst their incomes reduce as they enter retirement.  So they simply cannot maintain the demand levels seen when they were younger.  (More detail is in the blog’s earlier series on the world’s Top 6 economies: US, China, Japan, Germany, France, UK, which combined, are more than half of the global economy).

The blog hopes that Boards will listen to the evidence on this crucial demographic issue before making final decisions on all this new capacity.  Please click here to download a copy.

Otherwise it fears their successors will be the ones losing sleep, as they find it impossible to sell all the new capacity that has been built.