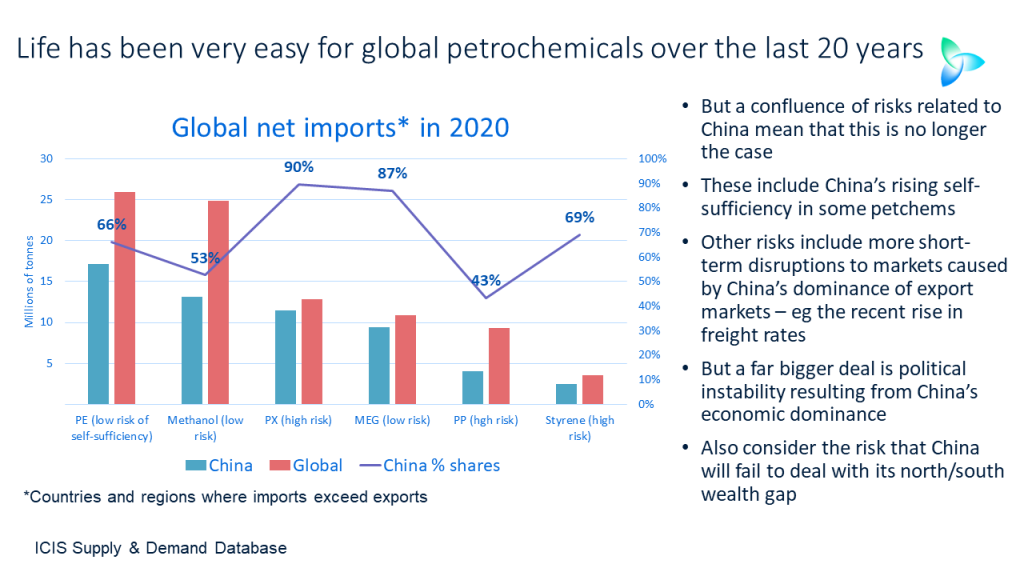 JUST 5% of US companies with revenues of more than $500m plan to relocate operations out of China, according to the latest survey by the American Chamber of Commerce in Shanghai. This partly reflects highly networked manufacturing clusters, wrote the Australian Strategic Policy Institute in this excellent article.

“Automotive and electronics clusters are increasingly important in Chongqing, smartphones come from Shenzhen, and a quarter of the world’s optical fibre comes from Wuhan,” said the same article.

Network clusters generate advantages including increased productivity through specialised inputs and more rapid innovation through cooperative  research; also, in business speak, what is called “competitive striving”. New business formation is more likely to take place inside rather than outside clusters because of the above benefits.

And in China’s case, as was the case with Japan, South Korea and many other planned economies at the height of their manufacturing-led growth, government-funding of innovation is a major advantage.

Let us take semiconductors as one of many examples. China’s partly state-owned Semiconductor Manufacturing International Corp (SMIC) recently raised $7.5bn from an IPO. This was supplemented by $2.5bn of government funding. China’s semiconductor manufacturers still lag behind the best in the world, but I wouldn’t bet against China catching up in just a few years’ time.

And we are already in the remarkable position where China makes more than 90% of the world’s smartphones, more than 50% of liquid crystal components and even bigger proportions of air conditioners, ceramic washstands and toilet seats.

Then there is China’s vast domestic market where demand for everything from oil and gas to petrochemicals all the way down to finished goods has long surpassed consumption in any other single country or region.

We can use the ICIS data on petrochemicals as a very good proxy for demand downstream into finished goods. In polyethylene (PE), for instance, China accounted for just 12% of global demand as recently as 2000, way behind North America and Europe.  In 2008, China overtook North America to become the world’s biggest consumption region. Last year, we estimate China was responsible for 35% of global demand with North America a long distance behind at 18%.

China’s vast and rapidly growing domestic market means that if you are a company in any sector in China, you benefit both from great export competitiveness and booming local sales.

All the above has been nothing but good news for the global petrochemicals industry over the last 20 years. No matter how many cracker complexes, aromatics complexes and methanol plants China has built, it has so far been unable to keep up with demand, as the above chart illustrates.

But, as the above chart also warns, polypropylene (PP), paraxylene (PX) and styrene monomer (SM) are high risks for exporters, as I’ve been detailing over the past 12 months. China could easily reach self-sufficiency in all these products in three to five years.

PE, mono-ethylene glycol (MEG) and methanol are, though, at low risk of self-sufficiency. No matter how aggressively you raise operating rates and add unconfirmed capacity above the base cases in our ICIS Supply & Demand Database – and even if you also assume much lower demand growth than our base cases assume – China remains a major importer in all three products up until 2030.

But I think it is wrong to assume that China will not become self-sufficient in PP, PX and SM. China sees petrochemicals, like semiconductors, as a way of adding value to its economy. Geopolitical anxiety is also a motive behind the state-backed push towards petrochemicals self-sufficiency.

There are other major risks from this overdependence on China that the global petrochemicals industry must consider. These can be divided between short term periodic risks and long-term risks.

Last year was a tremendous year for petrochemicals exporters to China. This was driven by a big surge in Chinese petrochemical imports that were re-exported as finished goods, as China provided most of the global supply of the goods we needed for our pandemic lifestyles. These included face masks, hospital gowns, washing machines, laptops, tins of paint and wallpaper.

Despite a strong recovery in domestic retail sales from August onwards, for the year as whole compared with 2019, China’s retail sales were still 3.9% smaller.

But the export story, even by the standards of Chinese data, takes your breath away.

“In December 2020, for the seventh straight month, China registered strong trade growth. Exports increased 18.1% year on year to $281.9bn. China’s trade surplus with the rest of the world increased to $78.2bn in December, its highest ever, beating its previous record of $75.4bn in November,” wrote Trade Data Monitor (TDM).

Illustrating how China was able to switch seamlessly into making more of the goods we need during the pandemic, which more than compensated for falls in other categories of exports, TDM reported that full-year exports of high-tech goods increased by 6.3% to $776.7bn during the full year 2020.

There were declines in exports of products people use to move around. Exports of bags and containers fell 24.2% to $20.6bn with shipments of garments declining 6.4% to $137.4bn.

Other unexpected problems may emerge because of China’s increased export dominance – for example, the Chinese electricity shortages that began in December and are expected to last until February.

More than a dozen cities in Zhejiang, Hunan, Jiangxi, Shaanxi, Inner Mongolia and Guangdong provinces saw limits on off-peak electricity usage in early December, which have reduced manufacturing output. The textile industry is said to have been particularly badly affected.

China’s coldest winter since 1966 is one reason for the power shortages along with a lack of liquefied natural gas storage capacity. This has led to coal-fired power stations on the outskirts of Beijing being turned back on for the first time since 2017.

But another reason behind the power shortages is the surge in Chinese exports. In December, as mentioned above, China’s exports rose by 18.1%. December is normally an off-peak month for exports.

Combine the electricity shortages with a new coronavirus outbreak in Hebei and Heilongjiang provinces, leading to travel restrictions on 23m people, and it seems likely that petrochemicals demand will decelerate in January and February.

Petrochemical exporters must get used to these types of disruptions for as long as China dominates global export markets to such an extraordinary extent.

A far bigger deal, though, are the long-term risks created by these global imbalances.

Donald Trump will on Thursday, Asian time, no longer be president of the US. The risk of an immediate resumption of the US/China trade war will probably be diminished.

But for as long as China maintains its dominance of global manufacturing – and I can see no short or medium-term scenarios under which this could change – US public resentment will surely continue over the loss of manufacturing jobs to China.

Might Joe Biden at some point come under pressure to respond to this resentment? A lot will depend on how quickly the US economy can recover from this terrible pandemic, and how effective US government stimulus is in creating new job opportunities.

But what seems already clear is that the incoming Democratic administration is in line with the outgoing Republican team on restricting Chinese access to higher-value technologies. There is a bipartisan agreement that China’s economic rise has been the result, it is claimed, of unfair government subsidies and intellectual property rights abuses.

So, I see no reason to believe that we will not continue to head toward a bipolar world of two trading and geopolitical zones, one led by the US and the other by China. This may mean China only imports the petrochemicals it needs from fellow members of its zone, leaving the US out in the cold.

Northern China’s share of the country’s GDP fell from 43% in 2012 to 35% in 2019 because it has lagged behind in introducing market reforms that have resulted in the booming export-focused manufacturing industries in the south, said Caixin, the Chinese magazine, in this article. Other than Beijing, every city in the 15 provinces north of the Huai River/Qin Mountains is in relative decline, the magazine added.

I grew up in the north of England. My father was a coalminer. Some communities in northern England – and Scotland and Wales – have never recovered from the closure of coalmines and steel mills during the 1980s, it can be argued. You can make a case, as I do, that this is down to lack of government investment in creating new, meaningful employment opportunities. Meanwhile, southern England has since the 1980s powered ahead, largely thanks to financial services and rising house prices.

Resentment over the north/south divide was a major factor behind the 2019 Brexit vote. Whatever side of the Brexit fence you stand, nobody can deny that the whole Brexit debate has been economically and socially disruptive.

China faces the same challenges on a scale which is obviously so much greater than those faced by England and the rest of the UK, because China’s population is much bigger.

Northern China’s former economic success was built around coal, steel and other heavy industries. Less competitive coalmines in northern China are being shut down as heavy manufacturing  is restructured because it is burdened with overcapacity.

I left my hometown at a very early age due to th lack of job opportunities. This is the pattern in northern China where many young people leave for the big booming coastal and southern cities.

China has an excellent track record of good economic management. But if it fails in its bid to close the north/south income divide, social unrest cannot be ruled out. If this were to combine with trade and/or technology wars which China loses to the US, growth in China’s manufacturing heartland would also be under threat.

We have had it easy for so many years

My four megatrends are sustainability, the pandemic, demographics and geopolitics in no order of importance because their relative importance is in constant flux and each interact with one another in ever-more complex and volatile ways.

Think of China and how its ageing population is forcing it to race up the manufacturing value chain. China’s push to attain higher-value technologies in order to compensate for rising labour cost is the source of tensions with the US, as I’ve described above.

But what is clear is that petrochemicals companies need very good political risk analysis as much as they need to evaluate my four headline megatrends.

I believe we are going through one of those periods of history where change will be rapid and highly unpredictable. The benign post-1989 world when life was easy for industry has come to a definitive end.