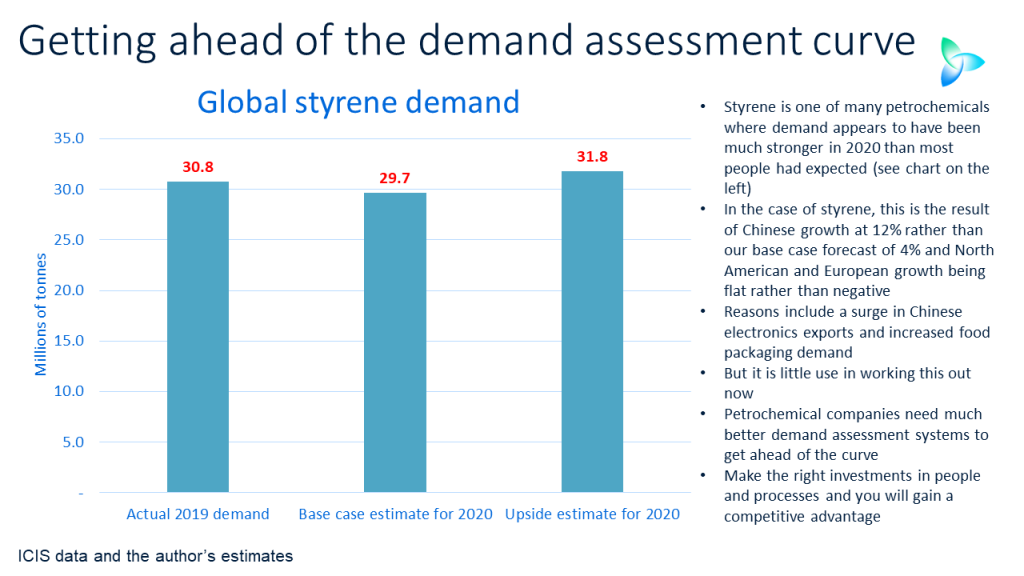 INVESTORS must look beyond measures of GDP growth if they are going to understand what is really happening in the global economy, wrote James Sweeney, chief economist at Credit Suisse, in the Financial Times.

“Body temperatures, foot traffic, internet trends and stimulus cheque arrivals represent a small sample of the data that have been critical in assessing real-time economic activity. These measures have told a more precise story of the 2020 economy than national account measures such as gross domestic product or inflation,” wrote Sweeney.

Hear, hear, I couldn’t agree more. The same applies to petrochemicals companies, as I have been arguing for the past five years. And, as I first pointed out last May, using GDP to measure demand has become even more of a busted flush because of the pandemic.

What the C-suites at petrochemical companies need to do – and some of them are already doing this – is to put the resources and expertise into better measuring changes in downstream demand all the way down to the final consumer. This work needs be extremely granular to have any value.

Digitalisation will help as whole new sets of data, which we don’t even know exist, are gathered and processed by machine learning and artificial intelligence. New data sets will also have to be created if we are to understand much more complex, much more nuanced, end-use markets.

This “touch and feel” of markets will remain critical, though, as data and computer models will only get you so far. Great on-the-ground sales and marketing executives will be even more important than in the past.

Successful sales and marketing executives must not only focus on our industry’s immediate downstream customers, the converters. Intimate knowledge of retail market and consumer behaviour will also be essential.

This will cost money – probably a significant amount. But the alternative of not doing this will cost you more because of the failure to adjust production in response to shifts in consumer spending patterns.

Let me give you just one of many, many examples. In the US, demand for disposable supermarket meat trays, made from general-purpose polystyrene (GPPS), was said to have unexpectedly gone through the roof in 2020.

This was the result of people eating more at home and much less in restaurants. An early view of this shift in demand would have enabled GPPS producers to raise production and pricing.

Monitoring the recovery in services demand

Petrochemical producers will also need to forecast the extent to which some service sectors recover in 2021.

This won’t just depend on an intimate understanding of consumer behaviour. What will also be essential is assessments of the success of vaccination programmes in bringing the pandemic under control. Where the consumer behaviour element might then come in will be assessing people’s willingness to get back on planes and visit restaurants again, assuming a positive outcome for vaccine rollouts.

Let us assume a bad outcome for vaccinations as the virus continues to mutate. At first glance, you might conclude that this would mean continued strong demand for replacing washing machines, kitting out homes and offices and redecorating homes as lockdowns continue.

But not if we have already reached periodical high points of demand for these purchases as they are only occasional purchases. We only buy new washing machines, laptops and redecorate our homes once every few years.

To what extent were the demand surges we saw in hygiene and food-packaging the result of panic buying? How many bottles of hand sanitisers and detergent are in storage, in people’s homes? How many deep freezers are so full of frozen food that their lids and doors will barely shut?

One view is that we are unlikely to see the same growth in these end-markets this year as we did in 2020 because of amounts in storage. But this anecdotal. We simply don’t know. What we need is the data and the ability to properly interpret levels of inventory versus rates of consumption.

A further level of complexity is food packaging demand in developing markets. As tens of millions of people fell back into extreme poverty last year, demand for supermarket food declined as people returned to cheaper local shops and cut back on their food spending.  Local shops in countries such as India stock food that is wrapped in less plastic packaging than supermarkets.

To what extent will we avoid a bifurcated world – a successful rollout of vaccines in the West versus the failure to distribute and inject vaccines in the developing world because of lack of funding?

Also consider the extent and efficacy of further government stimulus in 2021. If you had forecast the Democrats to win the Georgia Senate runoffs, you might have been ahead of the curve in assuming another big stimulus programme would take place, following the one passed by Congress in December.

Thanks to gaining control of Congress, Joe Biden seems to be in a good position to pass into law another programme, even though he may end up achieving a bill only half the size that he wants because the Democrats are unlikely to get a 60-vote Senate super majority. Such a majority would be required to pass Biden’s new $1.9trn stimulus bill without major modifications.

Political analysis has always been important for understanding the direction of demand. This is more the case now because of greater political uncertainty resulting from the pandemic and because, due to the collapse of industries such as airlines and restaurants, governments are playing much bigger roles in economies.

The pace of success in bringing the pandemic under control will be crucial in assessing the nature of government stimulus and how the different composition of stimulus programmes will shape demand.

Failure to control the pandemic in 2021 will mean lots more emergency stimulus, targeted at low-paid workers in industries such as restaurants and hotels. Success will mean a migration of stimulus away from short-term support to long-term spending.

Comparing the success of short-term versus long-term success will at some stage become important.

Jobs that are now on government life support, such as in restaurants and hotels, will disappear as short-term stimulus is wound back. We will need to understand how lost employment is replaced by new work as long-term spending kicks. New jobs are likely to be created in, for instance, the green economy.

Properly understanding China will remain critical. An essential area of focus over the next few weeks will be whether China is able to bring its new outbreak of the pandemic under control.

Putting all of this into some numbers

In 2019 it is estimated that 19% of global end-use demand was into the autos sector via polymers of styrene such as acrylonitrile butadiene styrene. Styrene end-use demand into packaging was 25%.

But last year, styrene consumption into autos is forecast to have fallen to 14% as demand into packaging rose to 30% – partly, perhaps, the result of demand changes such as my meat-tray example. Again, think of the benefits of seeing this shift as soon as it happened, ahead of your competitors.

I believe that, on balance, the changes in demand resulting from the pandemic had a very positive effect on the global styrene industry in 2020.

2020 seems to have been better than our base case because the key China market grew by around 12% versus our base case forecast of 4%.

North American demand was, I believe, flat instead of the 9% fall under our base case; European demand was flat rather than falling by 8%; demand growth in Africa, the Middle East and Asia & Pacific didn’t decline by as much as our base case assumes.

Will these trends continue in 2021 and beyond? Please don’t look at GDP forecasts for the answer. You should instead evaluate all the factors detailed above by making the right investments in better demand management.