Here is another personal plea about the scale of the plastic waste challenge our industry confronts. We need to act urgently to solve disposal problems in the developing world. 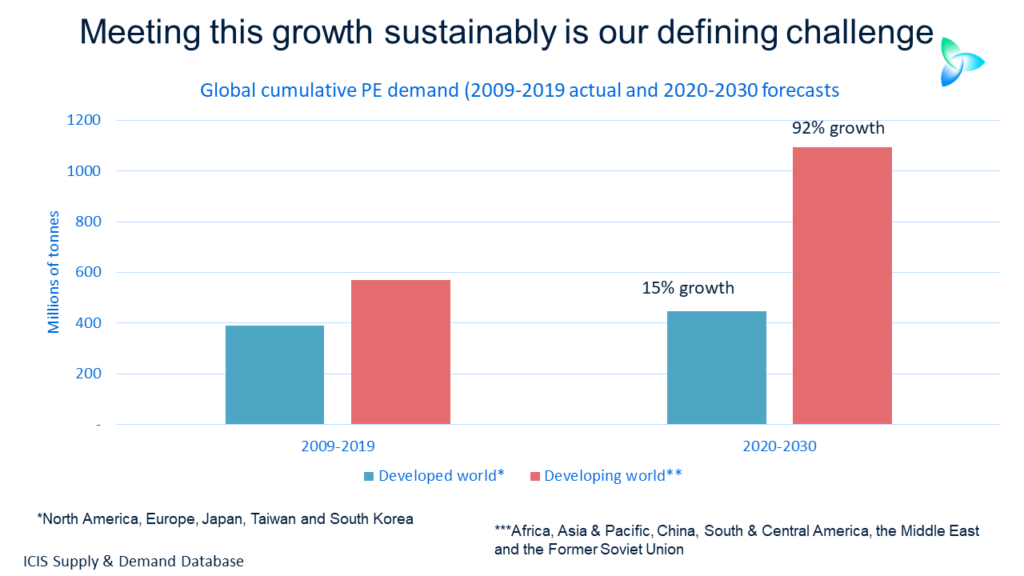 IN 2015, a global agreement was reached that 8m tonnes a year of plastic waste entering the oceans was unacceptable, according to this September 2020 article in The Conversation. This was the amount of plastic that  was estimated to have ended up in the oceans in 2010.

“Several international platforms emerged to address the crisis, including Our Ocean, the UN Sustainable Development Goals and the G7 Ocean Plastic Charter, among others,” continued the article.

But in 2020, an estimated 24m-34m tonnes of plastic waste was forecast to enter our lakes, rivers and oceans. This could reach as much as 90m tonnes in 2030 if the current trajectory continued, said The Conversation.

This is the type of information out there, free to view on the internet and accessible via a very quick Google search, representing a major challenges for our industry. I cannot of course verify the numbers. But they are out there.

Also out there is a May 2019 article by the World Economic Forum (WEF), which provided a good summary of research into what experts believed was the scale of the waste problem in the developing world.

Between 400,000 and 1m people died each year in developing countries because of diseases caused by mismanaging waste, wrote in the WEF, quoting research by the poverty charity, Tearfund.

The WEF shared my view that as countries became more prosperous, and as urbanisation and population growth accelerated, this would make the waste problem even bigger.

The products that our industry helps manufacture are not just luxuries. Many are lifesaving. All of us should therefore hope that many more people in the developing world gain access to the goods that we rich people take for granted.

The WEF also agreed with my opinion that local governments in the developing world would struggle to find the money to build proper waste collection systems. Waste collection is often a service as the industry rarely makes a profit, I’ve been told.

Here are some more statistics from the WEF report: up to one-third of cattle and half of the goat population in developing countries had consumed significant amounts of plastic. This led to bloating and death by starvation.

It has been suggested that at least labour supply is not a problem in the developing world, as there are plenty of waste pickers available to raise collection rates.

But this was dangerous and unhealthy work, added the WEF. Rubbish dumps were breeding grounds for mosquitos and rats, said the same article. Smashing and burning waste to get at materials released dangerous gases and chemicals.

My focus on the plastic waste crisis has until now been entirely on the impact of single-use plastics. But we must also consider e-waste – for example, computers, TVs and refrigerators.

Many of the people working on the world’s largest e-dump site, in Agbogbloshie, Ghana, suffered from nausea, headaches, burns and other injuries, while others had died of cancers in their early 20s, said the WEF.

“Mismanaged waste spreads disease in a number of ways, including through floods caused by blocked waterways and from pollutants that are released when waste is burned,” wrote resource.co in another May 2019 article. The article reported on a 2019 study by the Institute of Development Studies, No Time to Waste: Tacking the Plastic Pollution Crisis Before it’s Too Late.

Resource.co, again quoting the study, wrote of how wealthy countries with established waste management systems were exporting their waste to other countries for processing. In January 2018, China started to heavily restrict imports of mixed plastic waste for health reasons, but this led to the trade shifting to other countries such as Thailand, Malaysia and Vietnam.

The problem with the trade is that most of the exported plastic waste cannot be recycled when it arrives at its destination. What isn’t recycled is burned or dumped into rivers and oceans because. as I said, some 2bn people lack access to any rubbish collection systems.

New rules on exports of plastic waste came into force on 1 January 2021, reported The Guardian last December. The rules made the trade more transparent in order to allow developing countries to refuse low-quality, difficult-to-recycle waste before it was shipped, said the newspaper.

“It is my optimistic view that, in five years, we will see results,” Rolph Payet, the executive director of the Basel, Rotterdam and Stockholm conventions told The Guardian. The new regulations were introduced under the conventions.

There have been plenty of reports of the trade continuing since then. But other restrictions on exports of plastic waste may happen. For instance, pressure is building for the UK to ban all waste exports following a Greenpeace report that UK plastic waste was being burned or dumped on roadsides in Turkey.

The WEF report’s comment on rising prosperity, urbanisation and populations in the developing world links to the above chart, from our ICIS Supply & Demand Database.

One can argue that China is a case by itself as it isn’t a standard developing country. It has the resources to improve its waste collection systems, it can create a modern, state-of-the-art recycling industry and has launched a major plastic clean-up. But five of the ten rivers responsible for more than 90% of the plastic waste in the ocean flowed through China, said a 2017 study.

There are no easy solutions to this crisis

The growth of mechanical and chemicals recycling in the developed world will help  consume plastic waste that can no longer be exported to developing countries. Redesigning packaging to use less polymers and only single types of polymers in films, rather than layers of different polymers, will also help.

Will the recycling business, though, be a carbon winner when you consider all the carbon reduction technologies being developed for existing and new refinery-to-petrochemicals plants? Life cycle analysis necessary to answer this question I don’t think exists yet.

Chemicals recycling on a commercial scale is thought by some experts to be ten years away.

Recycling will also have a place in the developing world as the industry develops, but it will only be one a range of solutions, I believe. To talk exclusively about recycling as the only answer skirts over the logistics, economic and political complexities in poorer countries.

I believe the first step should be to recognise that the root of the crisis is how plastic waste is being disposed of in the developing world.

Big investments need to take place in rubbish collection, landfill,  recycling and incineration systems. Incineration will, I believe, have a place if it can be done sustainability. Plastic contains a lot of embedded carbon – energy that can unlocked in resource-poor countries.

If most the major economies agreed to binding targets for reducing plastic waste in the oceans, we would have taken a big step towards a solution. Next would come regulations and incentives, which would involve lots of trial and error, to ensure targets for waste were met.

These regulations and incentives would represent an opportunity for our industry, helping those with the best compliance to move further to the left of the cost curve. A  new cost curve measurement system would be a major step forward. The systems would assess how effective companies were in tackling both plastic waste and carbon emissions.

I believe our industry, which is full of great innovators, can rise to this challenge. But we have no time to lose.