Home Blogs Asian Chemical Connections After the COP26 disappointment, the “blame game” will get us nowhere

After the COP26 disappointment, the “blame game” will get us nowhere

The implications of last week’s disappointing COP26 meeting in Glasgow are so complex and so numerous that is going to take more than one blog post to provide adequate coverage. In this first post, I look at the failure of COP26 to agree on a global carbon tax, in my view essential, and discuss the counterproductive “blame game”. I also report on good progress by some US-based global petrochemical majors in addressing the carbon challenge. But  a lot more needs to be done. 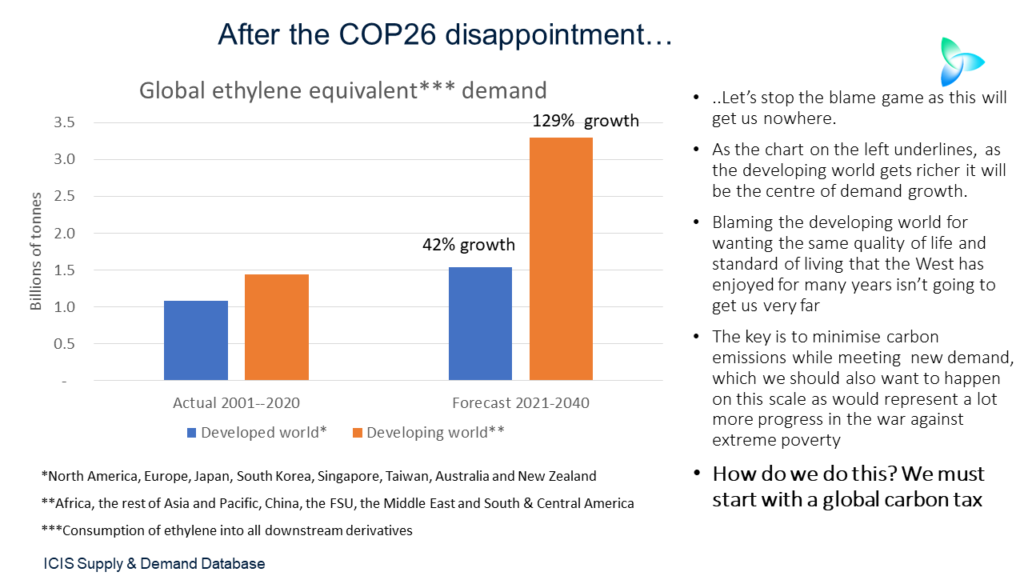 WE ARE ALL RESPONSIBLE for human-made global warming. All of us. We all therefore need to be involved in finding a set of extremely complex but achievable solutions which will constantly evolve.

And because we are all responsible, we should be careful about how we apportion blame. We must not slip into the trap of, “it’s mainly your fault, I’ve done enough, so it’s over to you”.

Take as an example the criticisms of China for not making stronger pledges at last week’s COP26 meeting in Glasgow to reduce CO2. Throwing blame around like this isn’t going to help build the unprecedented levels of international cooperation essential for solving our existential crisis.

It’s not just China that’s responsible or China’s CO2 emissions, but it is every one of us who has bought a cheap pair of Chinese-made jeans in a Western supermarket or a cheap washing machine, refrigerator, dishwasher, game console or TV in white goods and electronics stores.

China’s role as the workshop of the world is partly because insufficient costs are placed on the carbon emissions that its manufacturing industry generates. When you combine this with what are still pretty competitive labour costs despite an ageing population and superb supply chain efficiencies, beating the “China price” remains extremely difficult.

So, the next time any of us considers buying a $20 pair of jeans, perhaps we should consider the hidden cost of carbon that would be involved in this purchase and our role in making it harder for China to reduce emissions.

Taking this example further, let’s think of the nature of China’s economic recovery from the pandemic. As I’ve been highlighting since September last year, the recovery was the result of a boom in exports. China’s export growth has been so strong that it is struggling to hit its targets for CO2 reductions under its 14th Five-Year Plan, which runs from 2021 until 2024.

There are buyers and sellers in this booming trade, including myself, who, because I am middle class and Western and so in a financially good position relative to many people in the developing world, I bought a new TV last year.

Unable to travel because of coronavirus restrictions in Western Australia, my family has spare cash to spend on durable goods. We bought a TV made in China last year and the amplifier I bought for my electric guitar the other week was also made in China.

Developed world governments, including the Australian government, have spent trillions of dollars on economic stimulus since the pandemic began.

These governments therefore also carry some of the responsibility for China’s emissions increases as a lot of that money has been spent on goods made in China, bought by my fellow members of the Western middle class who were bored during lockdowns.

This is not meant to be a criticism of anyone who buys a $20 pair of jeans, right up to, say, the US government’s job furlough scheme.

Someone who buys a $20 pair of jeans made in China from a Walmart in Louisiana might have no other choice because they are on a low income. And what else could the US and other governments do but launch huge pandemic stimuli?

The US government had a responsibility to protect workers, especially those in service sectors such as restaurants and hotels that were heavily affected by coronavirus – and they fulfilled that responsibility.

This doesn’t mean that I don’t think governments and companies shouldn’t be held to account and that of all of us shouldn’t be pushed to do more to address the crisis.

Let’s take this a step further. Companies under the capitalist system must constantly maximise profits, right? And a good way to boost profits is to offshore manufacturing to cheaper lower cost locations, not only, of course, China but as its labour costs rise, increasingly also Vietnam and Bangladesh etc.

Profitable companies mean strong share dividends and pension funds that invest in stock markets. In other words, therefore, the retirement security of hundreds of millions of middle-class Westerners depends on the system as it stands today, where an inadequate cost is placed on carbon.

A global price on carbon is essential

Companies and individuals will only change their behaviour if they are given incentives to do so. This is why I continue to believe that a price on carbon is essential. The price must be global to work. But, sadly, last week’s COP26 meeting Glasgow concluded with no agreement on a global carbon price – and the meeting in general, as I thought would be the case, was a disappointment.

As Gillian Tett, the outstanding journalist, wrote in the Financial Times ahead of COP26, governments needed to commit to a $50/tonne carbon price or tax at an identified rate in the future.

“No, I have not plucked that number out of thin air (or an environmentalist’s pamphlet). It comes from a coalition of some of the world’s biggest banks, asset managers and insurance companies, known as the Sustainable Markets Initiative,” wrote Gillian.

Some good news is that petrochemical industry leaders agree that a price on carbon is needed.

Dow Chemical and ExxonMobil were pushing for a price on carbon emissions to accelerate investments in carbon capture and storage (CCS) infrastructure, along with other decarbonisation measures, wrote my ICIS colleague Al Greenwood in this Insight article on last week’s annual American Chemistry Council (ACC) meeting.

He quoted Karen McKee, president of ExxonMobil Chemical, saying during the meeting, “A price on carbon will give the industry confidence to make the investments that are needed to get to a low carbon future”. Hear, hear!

ExxonMobil, Dow and nine other companies want to build a Houston hub for CCS infrastructure that could capture and store up to 50m tonnes/year of CO2 by 2030 and about 100m tonnes/year by 2040.

Dow CEO Jim Fitterling laid out the policy prerequisites for building a new cracker in the US – a price on carbon, CCS infrastructure and government incentives to build such carbon mitigation assets.

“The pathway to carbon neutrality is not easy and it’s not free… Public policy can accelerate this, and we are fully engaged [with government] to de-risk investments,” said Fitterling.

The ACC meeting was also notable for this comment from Luis Sierra, CEO of NOVA Chemicals: “Conventional, conventional crackers – we won’t see another one built [in North America]. It will be more expensive and involved.’’

This needs to be a global phenomenon as a discussed. We cannot afford to build more conventional crackers anywhere, and, as with every other aspect of this crisis, the developing world will need support – and must be given the incentives – to make the green transition in petrochemicals. Ergo, again, we must have a global carbon tax.

All new petrochemical complexes should include new green technologies such as blue and green hydrogen and electric furnaces fed by renewable energy. Very interestingly on the theme of new technologies, NOVA is working on a process innovation that would not produce CO2 in the ethylene production process itself – essentially changing the chemistry to decarbonise the reaction.

You might think that hoping for no more construction of conventional crackers is pretty much pie in the sky. But China’s Common Prosperity pivot, which only occurred three months ago, greatly increases the chances of a wave of innovation in the refining and petrochemicals industries.

Beijing has a great track record of introducing incentives that have led to booming local renewable energy, electric battery and electric car industries. This leaves me very hopeful that China can, along with the US and the EU, lead the way in greening the petrochemicals business.

Demand that needs to happen, but must be met sustainably

We cannot expect some young guitarist in India, perhaps the next Jimmy Page, not to want and deserve an electric guitar and amplifier.

Back to the subject of blame. The developing world should not at all be blamed for wanting all the goods and services that the rich world takes for granted. Many of these goods and services are somewhat more essential than electric guitars, such as potable water, decent infrastructure, food that’s safe to eat and modern-day medical services.

We will have to build a lot more steam crackers, reformers and downstream petrochemical plants to provide the quantities of raw materials necessary to meet the extraordinary 2021-2040 ethylene equivalent demand growth estimated in the chart at the beginning of this. Consumption growth in the developing world is forecast to be 129% versus just 42% in developed countries.

So, the key is how we build the required steam crackers and reformers in order to at least minimise CO2 emissions. Let’s take this further. Is it possible to build a carbon neutral cracker or reformer? Why not? We have big enough brains in this industry to do this.

We are all in this together. Let’s get this thing done before it’s too late and stop the counterproductive blame game.

PREVIOUS POST New China HDPE import scenarios for 2021-2031 in the context of Common Prosperity
NEXT POST China could either see net imports of 63m tonnes in 2021-2031 or net exports of 18m tonnes!